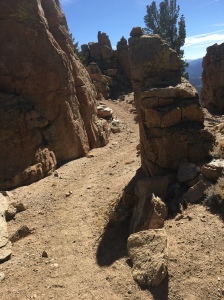 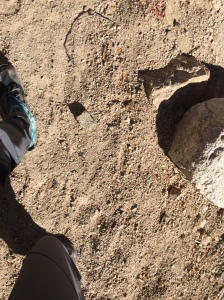 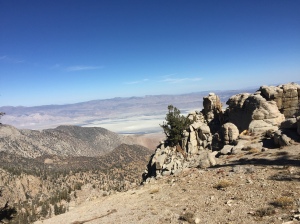 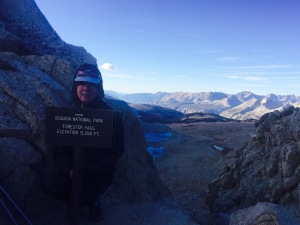 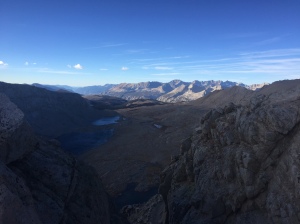 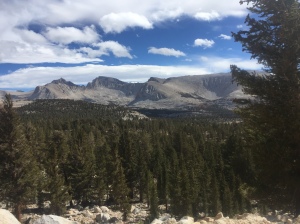 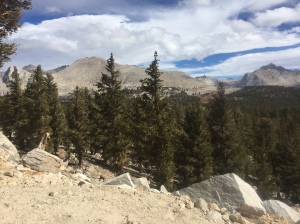 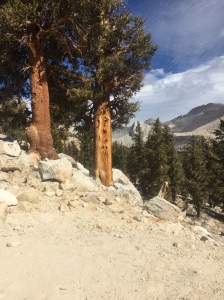 I’m not climbing Mt Whitney which many PCTers do as a side trip. I’ve been up there 4 times and it’s just not that pretty of a peak.

We hiked over Kearsarge and part way up Forester, a short day, but that’s the way campsites work. We pitched our tents in the treeline, a little protection from the wind and got a good start in the morning. It only took about 2 hours to get to the pass where we were buffeted by the wind coming up from the west. What is usually a quick trip down the switchbacks and on down the valley to Tyndall Creek was made a lot slower by the headwind. It took a long time to get down far enough that I could delayer. The wind ran right up my nose for miles, giving me an ice cream headache.

We parted company for a few days, Puff Puff was going to climb Whitney at dawn while I headed out at Horseshoe Meadows to be whisked away by Noreen to Desert Trip to see The Who and Roger Waters in an outdoor concert.  So fun! Great shows! Quality time with a close friend!

Too soon, a couple days later, I found myself hiking back to the trail from Horseshoe.  It was odd camping by myself again but the weather was clear, the wind gone. The first morning I saw a herd of 12-14 deer with a large buck heading them uphill above 10000′. A cowboy was riding up the trail and I asked him if he was deer hunting. I’d heard a rifle shot earlier in the morning.  “Nope, cow hunting.”  “Haven’t seen any of those,” I said.

In the space of a few minutes, I went from High Sierra granite to sticker bushes, then cactus and heat.  Heading NOBO last year, Kennedy Meadows was the destination: 700 miles, the end of “The Desert” and the beginning of the Sierra.  I never thought what it’d be like going the other way and  dropping into heat and aridity.  As I see the stickers and cacti, I relax, “You did it, you did it, you did it!  You made it through the High Sierra before the big snows.”  And it was so beautiful, so empty of people,  so wild yet familiar.  This was my fifth walk along the John Muir Trail, my third heading south, and the best so far.

Is it the time of year?  Wildlife in herds, flocks and murders? That same day I flushed a flock of birds out of a tree and a horde of grouse foraging on the ground in manzanita bushes.

I camped by a creek just a few miles short of Kennedy Meadows, it was perfect, just the sound of water gurgling and a soft bed of sand and needles for my tent, warm night and clear starry skies. Walking up the road to the General Store, I saw Walking Mantis. “Catwater?  Puff Puff is waiting for you!”

On the deck, just 3 hikers, in contrast to the NOBO crowd last year if 30.  Puff, Decaf, Strings and I sat and gossiped and drank sodas or coffee or juice. I packed up my resupply and a bunch of water and headed back to the trail with Puff Puff and Decaf. Reunited!