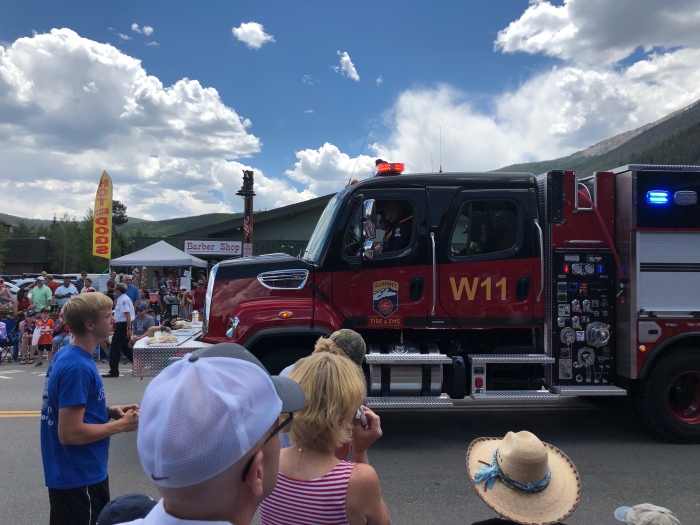 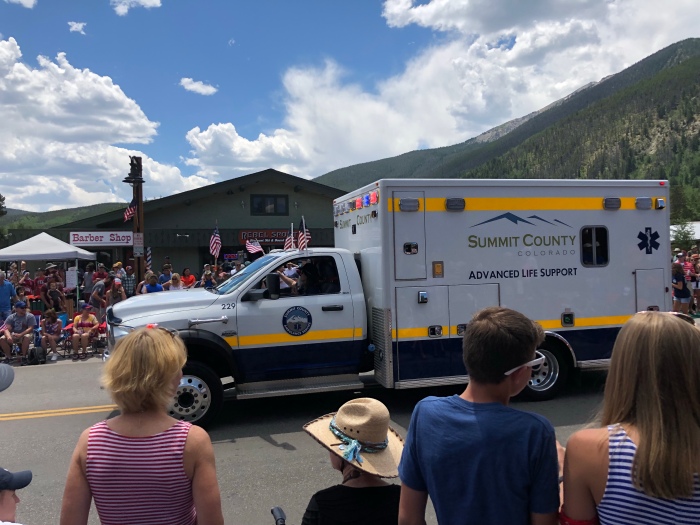 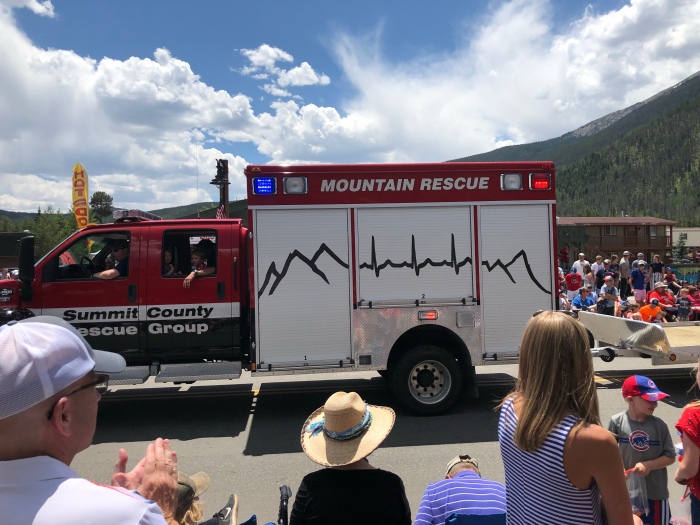 We took the free bus to Breckinridge and ate real food and drank real beer, all of us, safety in numbers, filthy, stinky and with our disgusting packs next to us on the outside deck. I Pricelined the most affordable hotel for 3 for 2 nights that I could find, so we took another free bus direct from Breck to Silverthorne. Showers, laundry and comfy, comfy beds.

I must confess that I’m not a big fan of the 4th of July celebrations, especially without fireworks. At home in Alaska, it’s not dark in July but New Year’s is, even if you have to wear all your arctic gear to watch the show. The parade in Petersburg, Alaska is my all time favorite-Viking boats! We got up on the 4th, ate free breakfast and went to REI of course. Then took the bus to Frisco and walked up Main St. Nuthatch and I kept telling BC that it really wasn’t a typical parade: the long gaps between paraders, the lack of marching bands and banners, the disorganization. But we got free hot dogs from a church, free lemonade and free ice cream, that made us all giddy. When the Republican politicians appeared with their obnoxious slogans I excused myself to my friends and turned my back to the parade, a quiet resistance.

To link miles on the CT and CDT, Burning Calves wanted to hike the CDT from Copper Mountain to where the trail crosses the road to Breck, where we got off trail. Nuthatch wanted to do the same but she intended to keep going, back to where we came from days earlier, where the CDT and CT diverged, and on north to keep hiking to Grand Lake. I’ve hiked all of the CDT through here, but on the Silverthorne Alternate which neither wanted to do, and so I was happy to slackpack (day hike) something I hadn’t done before. We got the bus to Copper and Nuthatch started out the trail with lightening threatening. I declined to hike up, so BC and I decided to hike low on the bike path to Frisco (me) and all the way to Silverthorne (BC). We heard thunder and pretty soon got a text from Nuthatch who decided to be safe and not hike up above tree line. She soon caught up to us. It rained, and cyclists thronged the path in both directions. BC continued to Dillon, we took the bus from Frisco and we all met for dinner eventually at the Dillon Dam Brewery.

The weather improved the next day and we all hiked the CDT from Copper to the road to Breck, about 15 miles.

July 7, I said goodbye as BC and Nuthatch hiked past our motel up the Silverthorne Alt to Winter Park and Grand Lake. They intend to hitch back to Copper and then go south to Monarch Pass on the CDT/ CT. We’ll always be the Tres Amigas. One of our little jokes is to stop using the word “stupid” and substitute a more precise description for that word. It’s amazingly hard not to say “stupid” a bunch of times a day. Especially if you’re in range of the latest political news. And now I have to monitor myself. No cheating, eh?

I took a bus to Denver, after another trip to REI to replace the rain pants that soaked through 2 days ago, and got a flight to Jackson Hole where I have a long hitch or Uber back to Togwotee Pass where I left the trail last August. I’ve never been to Jackson so I wanted to see it. Logistics are a hassle, and expensive, when you’re not thru hiking.

I walked a couple miles from the Greyhound station in downtown Denver to the 11th St Hostel, a fantastic old building with high ceilings, ancient radiators and modern fans installed and blasting in the hallways to help cool the building from Denver’s 100*F heat. I went out and ate lunch, then out again to eat dinner while I worried about flight delays for Burning Calves on her way from Frankfurt. About 9:30 there was a knock on my door. Reunion! And she brought me German beer! 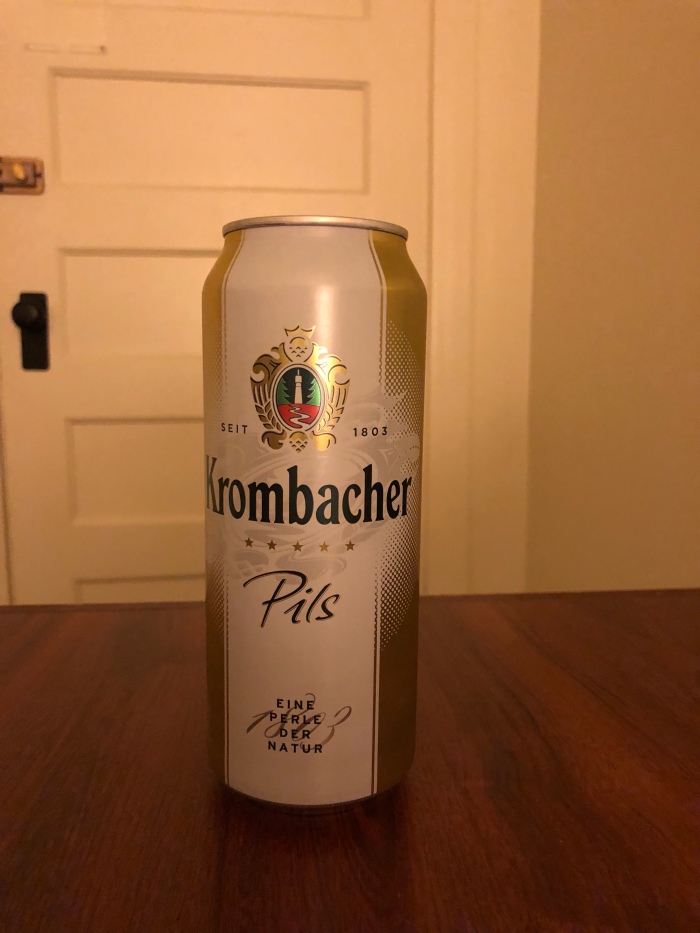 We went out to dinner, it was something like 4 am to her. The next morning we took a bus to REI for gear and supplies, then light rail to the end of the line then Uber to the Waterton trailhead for the Colorado Trail (CT). And there was Nuthatch waiting for us after walking 40 miles just to turn around and walk it the other direction with us. The last time I saw Nuthatch was last year at Ghost Ranch before she broke her leg and had to be helicoptered out. She’s still working on healing. The last time I saw BC, she was hitching back to Rawlins from the Red Desert as the Ravens and I said goodbye. 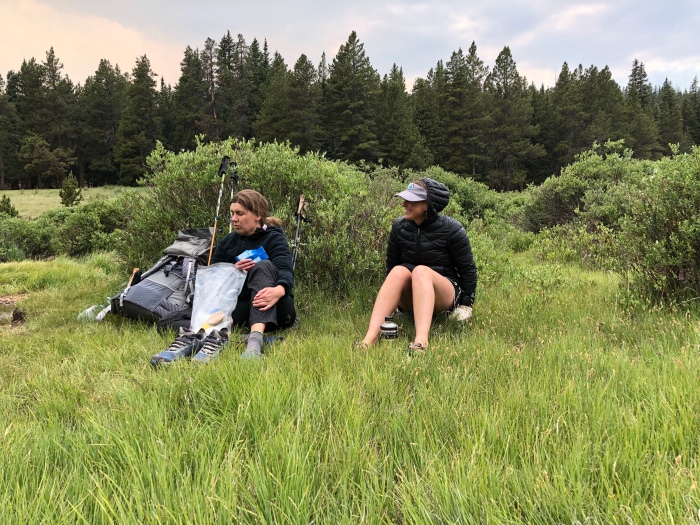 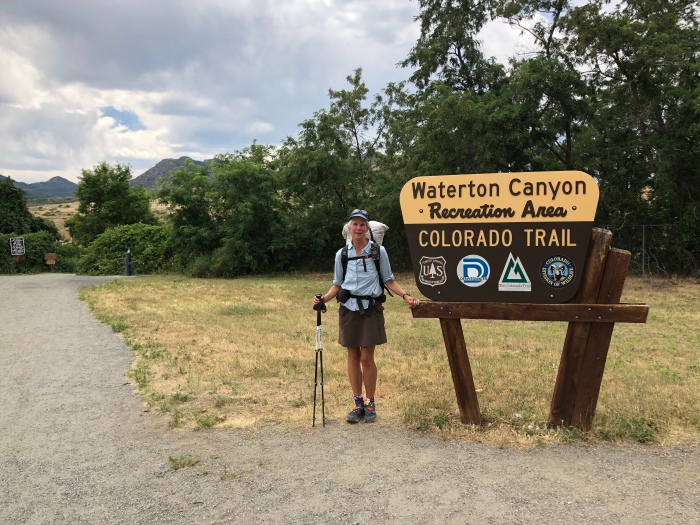 Nuthatch had staked out a wonderful campsite 8 miles uphill from the beginning of the CT, perfect! Burning Calves (BC) was sleep deprived, jet lagged and more than aware of the elevation.

Day 2 and it was hot! There were lots of people on their first long hike, the Colorado Trail, with heavy packs and the dawning misery of water hauls and altitude sickness. We took a break at a river, but after an hour and looking at many miles of uphill and heat, I said I’d get going and see them on one of my many micro breaks. Long story short, hours and hours later, I got water at a tap at a firehouse and sat down to make my dinner, feeling like a jerk waiting for them to catch up. First Nuthatch then BC appeared and we decided to camp (after 16 miles) with a couple dozen other hikers. Tomorrow we’d hitch into Bailey where Nuthatch began her hike and had left resupply and it didn’t matter if we were a mile or two closer or not, we’d get there in the afternoon.

And so it happened. We debated whether we should hitch in, get food and showers and hitch out, but in the end we ran out of time and a weird little hostel had 3 beds, etc so we overnighted. Bailey is a hiker friendly town with a great food truck at the local brewery! We paid $35 each for a basement room with plywood bunks, an outdoor shower and a portapotty. Had to use our sleeping pads and bags but we did get showers and laundry done and got the late (8:30) ride back to the trail, so it worked out.

Day 4 we met more CT hikers, including TJ, a dad, hiking with his daughter Honey Bee (14) and her friend, Marnie (15) doing the CT as a homeschool trip, wow! Why don’t I have pictures of these competent, confident girls? We wound up camping together with along with two guys, early 20’s, longtime friends from Michigan. TJ never heard it, but based on an offhand and admiring comment from Marnie, “that’s some dad shit,” I told Nuthatch and BC that a good trail name would be SDS. Of course we all laughed.

Day 5 the same group gathered at a campground for snacks and water. We three kept going to a little meadow at the bottom of a hill. We passed an ominous wildfire near Fairplay. The smoke was blowing away from us, but it looked gnarly. We crossed Georgia Pass where the CDT and CT come together heading SOBO. At last, I’m home on the CDT. I posted the photo at the top of this blog and my friend Jim asked if we were like the 3 Amigos, a group of volunteer men we used to work with. Bingo! The Tres Amigas was born! We are having such a wonderful time together, I just have to live in the moment and laugh and share and listen and love these two strong women hiking life.

We camped by ourselves again but the next day there was quite a posse heading to where the trail crossed Summit County free bus line between Frisco and Breckinridge. July 3 and BC wants to experience the 4th of July in the US. Sans fireworks due to the high fire danger. 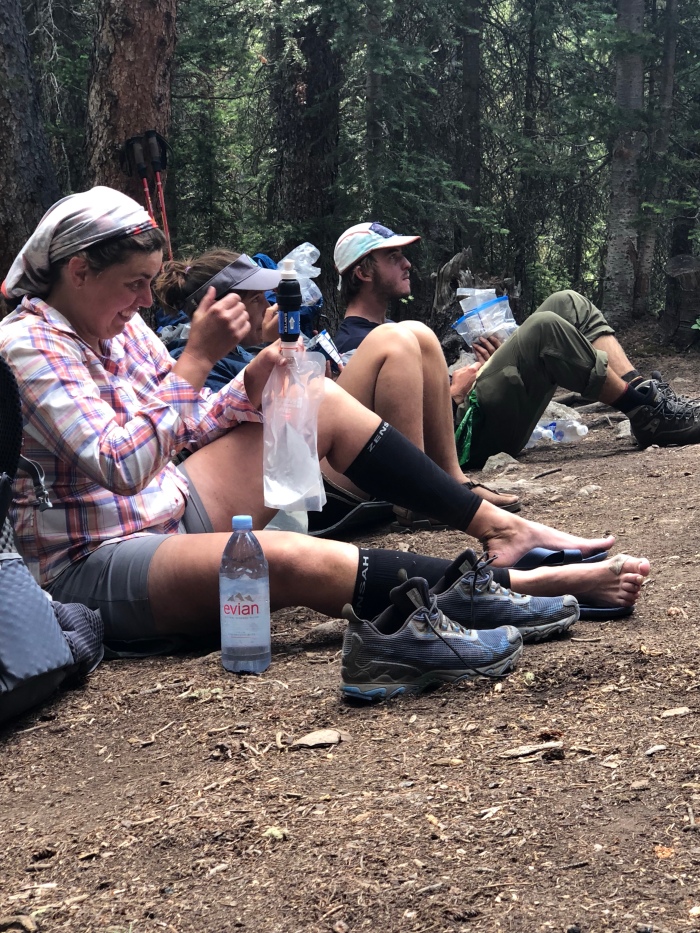