7/28 United Airlines still sucks as bad as the last time I flew them, let me see, to Europe about 10 years ago. SLC to DEN but all flights DEN to Durango apparently have issues. “Waiting for an aircraft,” “Waiting for flight crew to clear security,” meant my original 45″ flight delayed 9 hours but the replacement only delayed 3 hours.

7/29 But Durango is cool, got a replacement FjallRaven fanny pack and turquoise Arcteryx ball cap.

I took an UBER 84 miles to Wolf Creek Pass ($111) vs hitching through Pagosa Springs or the $300 to the same shuttle company I had to pay $50 for a ride from the Durango airport to town. The UBER driver has only moved to Durango from Texas 2 months ago and has not been up to the pass. Google maps and Guthook got us there.

I wrestled with which route to hike to Creede, intending the short (42 miles) Creede Cutoff which climbs to just 11,000′ but due to my late start (9:45) and the gathering thunderstorms, I settled on the chicken shit highway walk because I am only carrying food for 1 night, 2 days and last year it was my only option due to the San Juan forest being closed for fire danger. As I walked on the paved shoulder I came up with a list of other excuses for doing the chicken shit.

And then a couple of things happened on the road walk:

(1) About 3 hours in, a CDOT guy driving a snowplow/dump truck stopped to ask if I would accept a ride from “one of his guys” through “the Narrows” for my own safety. I cannot publish his name or photo because, you know, civilians aren’t supposed to ride in State rigs. He was sincere, concerned and respectful. “Yes,” I said and a couple miles later I climbed into his truck for a couple miles. I felt like a kid, so fun to ride in that truck!

(2) Memory. You forget stuff but place, specific places, spark memories. Chama, NM to Wolf Creek Pass, CO, was a tough stretch last year. Ups and downs, sketchy snow traverses (my campsite-sharing Brit buddies strapped on mini-crampons and slung ice axes this stretch, I used my sticks and didn’t slip ) and I was tired. After hitching to Pagosa Springs for resupply, I hiked NOBO out of Creede 2 days later feeling weak. I camped early, barely kept dinner down, and woke the next morning nauseous, puking, weak. I made it 7 or 8 miles to a trailhead marked on my map where I thought I could call the USFS maybe to get me. I lucked out and waited till the only day hiker with a car parked there arrived. I asked for a ride to the nearest town (I had no idea what town that would be) which turned out to be Gunnison. After a couple bad nights in a cheap motel I walked to the Clinic and “hit the jackpot” as the ER doctor said, with a Giardia diagnosis. So, last bullet:

Anyway, yay, skipped just a couple of miles due to the Good Samaritan CDOT dude and stayed in a South Fork motel, cooking my Packit Gourmet freeze dried dinner in my room.

OK, so I’m Aqua Mira treating the hotel water in South Fork and Creede. However I got Giardia last year, it wasn’t from not treating wilderness water, it was from filthy pipes in old buildings and not treating that water.

It was a gentle uphill most of the day, not horrible. A few cloud bursts but the road is not exposed so I wasn’t paranoid about the lightening.

And new owners at the Snowshoe Motel in Creede, super nice and the absolute best breakfast-included of anywhere on the CDT.

Storm clouds in the morning so I asked for another night and wandered this old mining town in my rain gear. I bought a new Columbia CPG hiking shirt but wrapped it in plastic and shoved it to the bottom of my pack. My current shirt is of course permanently pack dirt stained and the stink won’t wash out. Seriously nasty. The new shirt will be deployed when I travel back home in a week.

It’s a 10.5 walk uphill out of Creede to get back on the CDT/CT and I did it last year already and I hoped someone would give me a ride. And for 3 miles, a father-son duo did just that, thank you! Over all too soon, but saved me an hour and a half of the uphill.

I joined the CDT/CT and passed an old guy. Apparently doing 10 miles max a day. I told him I was camping early because of the 4000′ of gain I’d done. It was only another mile from where we met, a campsite noted on Guthook. I figured he’d do the same so I waited to set up my tent cause I didn’t want to be right next to someone. Sure enough he hobbled in. We cooked dinner together after a short get-to-know-you conversation opened by him saying, “I have a serious question for you.” Uh oh. “Have you accepted Jesus as your personal savior?” “No.” And then we moved on to other topics. I retreated to my tent after dinner and enjoyed the quiet at 12,000′, no wind, no cold, just mountains around me.

Beautiful, started early to beat the storms and walked across a pass, then Snow Mesa. I headed down as the rumbling started and the clouds built. Nearly to the highway at Spring Creek Pass, I talked to some dayhikers heading up into the exposed alpine. A few minutes later I got to the road trying to decide whether I should climb another 9 miles into the thunderclouds.

The day hikers Barbara, Jim, and Carla yelled from across the road. “Wanna ride to Lake City?” “Yes!” So they dropped 2 of us off at the hostel at about 1 pm. I met 11 Colorado Trail hikers including Leo the lab and his people Tammy and Greg, Brook and Kyle, Hermit, Dab and Mose, Pete, and Snow Day. I wasn’t planning on going to Lake City or sleeping in a bunk room with 7 other people, but it turned out just fine. Lucky me got to be “inspirational” to another young couple. I’m such a freak. 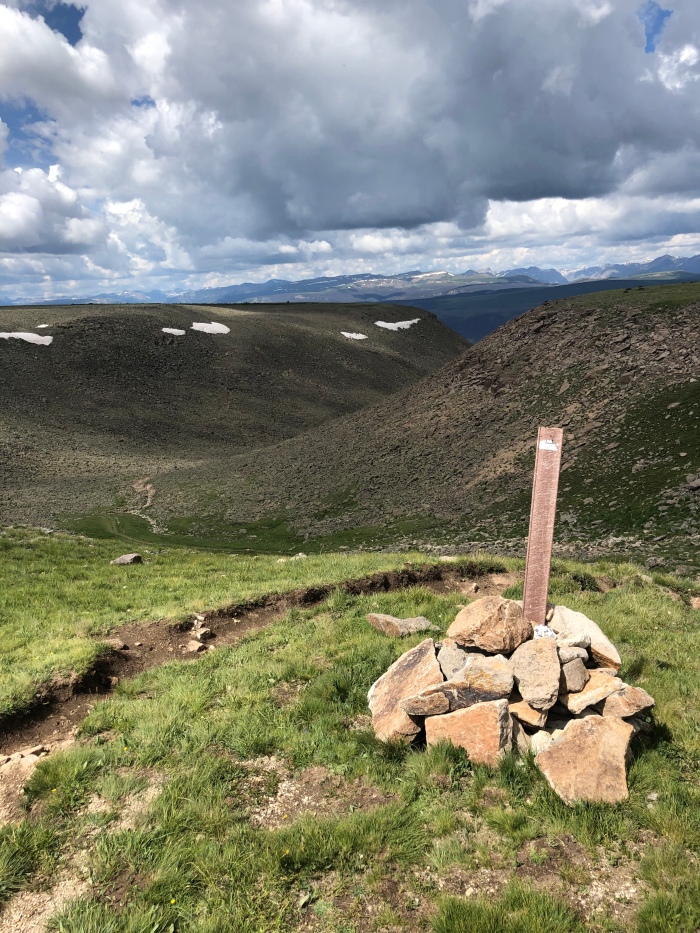 Hitched out at 7:45, got a ride in 2″ to the pass. After 9-ish miles, at the last water for 10 miles after a 7 mile climb, a CT hiker vortex developed, like a dozen hikers? Should we climb or should we camp? There were clouds but not horrible. After 4 others finally headed up, so did I. Got a deadline to make, I can’t keep wasting days for crappy weather!

The grade was just fine, only one steep pitch in 7 miles. Got to the Colorado Trail high point, then just 3 miles down to water and I found a beautiful campsite about 6:30. About 8pm, Snow Day joined me. I liked talking with him in Lake City, he’s from LA and has 3 cats he rescued. I loved the story and photos of how he gradually coaxed a litter of feral kittens in. 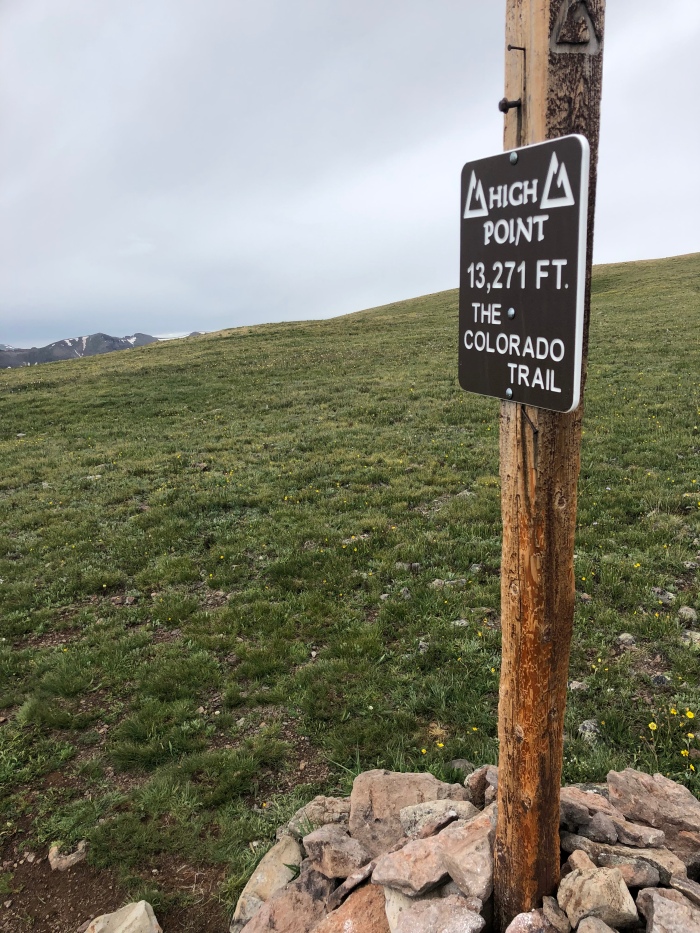 I left in the morning and never saw Snow Day. Guess he’s one of the CT’ers who get up late and hike late. 8 climbs today, PUDs really but lovely as you cross from valley to cirque to valley. Played tag with the Stoners, a couple of Virginia guys under 21 who take multiple smoke breaks. “It’s illegal where we live and you can’t even buy tobacco or a lighter unless you’re 21!” Nice guys, good hikers.

At some point I realized I could walk into Silverton on a bike alternate (they can’t ride in Wilderness) 20 miles before I thought I could, so I did. I am really sick of shit weather at 12-13,000′, I am. I saw the guys cross the road ahead of me back into trail as I hiked down Stony Pass Road, a steep old wagon road built in the1870’s to access mining country. Eventually I wound up at the Blair Street Hostel in Silverton. Blair Street is an historic district, so the exteriors of the buildings maintain a shabby authenticity amidst the hordes of tourists. I collected my resupply box and contemplated the fact that I was running down the clock on time I had left in Colorado before I get to go home to Alaska for a few days before my next trip to Yosemite. 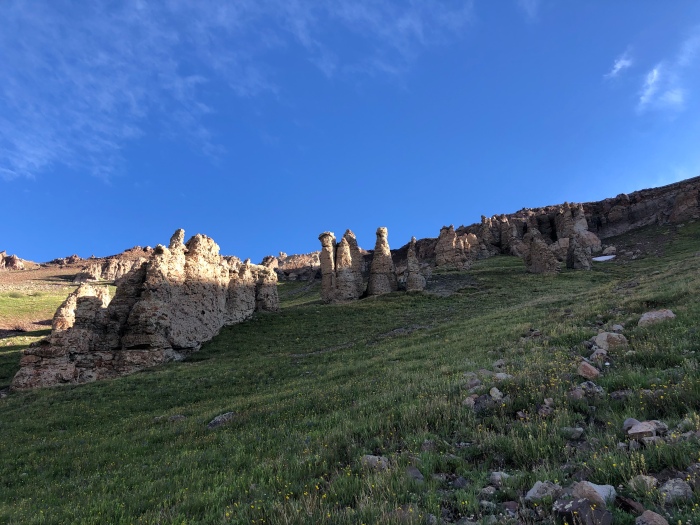 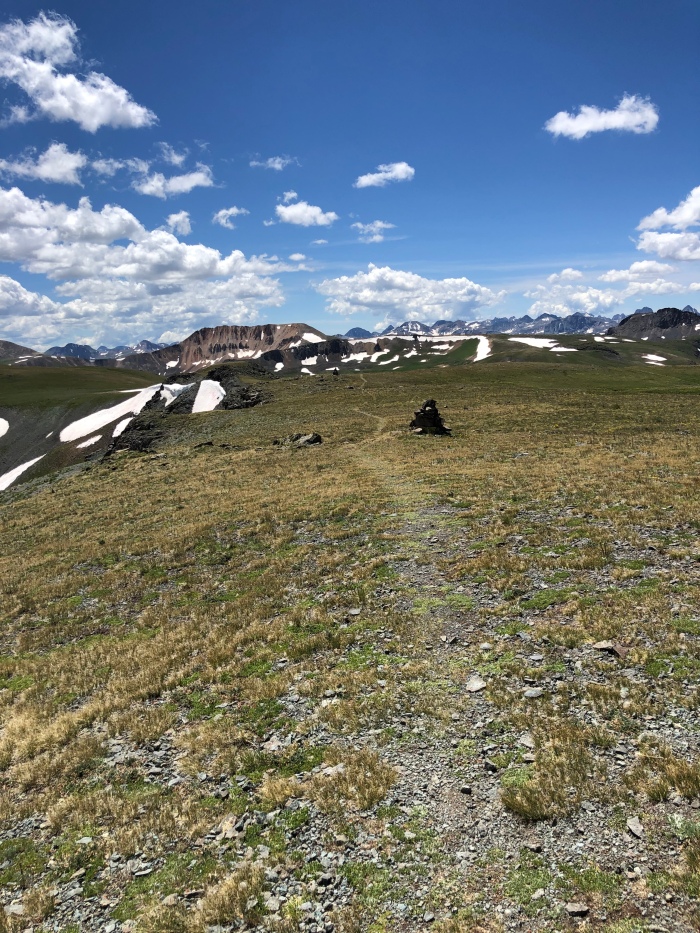 8/6-8 Does the train from Silverton to Durango count? I called this morning and got a 1-way ticket with narration, it was an incredible 3 1/2 hour journey!

I rented a car in Durango and drove to Mesa Verde NP. As I put it in a Facebook post, I visited for a few minutes on a family trip when I was a kid. It was raining so my mom made my dad keep driving. From my mom though, I inherited 2 perfect pieces of Mesa Verde pottery “collected” by my Great-Great Uncle Clayton Theodore Sallee in the 1880’s. My mom said he was on a hunting trip, but I think now that he took a tour of Mesa Verde in the pre-1906 Antiquities Act era where you were encouraged to grab artifacts. At any rate, I had them evaluated and appraised years ago by an expert. They are 1000+ years old with no provenance and can’t be returned. I have wanted to see where they were made by human hands for a long time. And, wow. Like the cliff dwellings in the Gila, it makes you think about all the cultures and tribes that have moved through the Americas through time, the stories we know, the stories we don’t. Foot travel, then horse travel later. I bought a reprint of the first archaeological study, published 1893. I can’t to read it and set it next to my pillaged pottery. 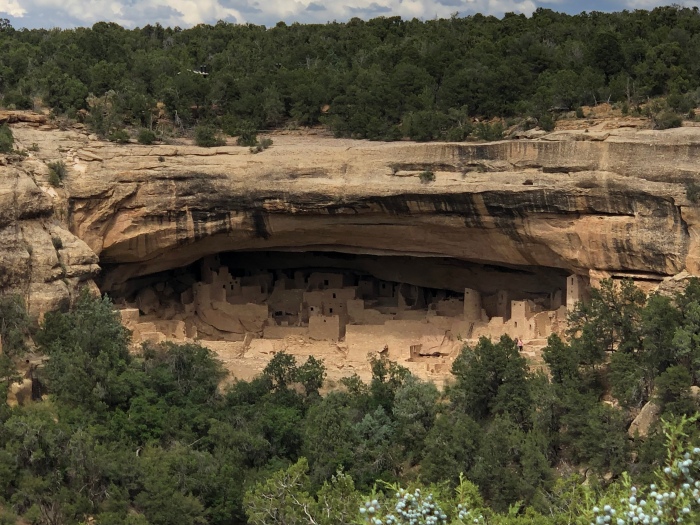