Skip to content
HomeHart’s Pass to Canada to Stehekin 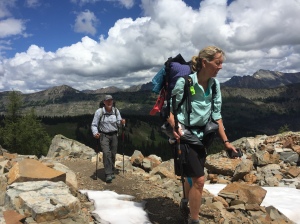 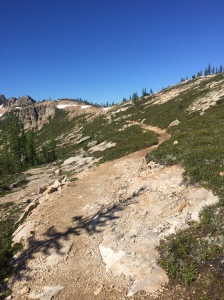 Glen dropped me at ANC airport (again) and off I went. A few flights later, I ….

Met Dan, and we stayed with his bro Dave and sis-in-law Teresa north of Spokane before they relayed us to Tonasket where Rick and Vicky hosted us and drove us to Mazama where we picked up Jackie from Nick, and then met Marvin and Sue who were transporting Puff Puff to Hart’s Pass for the launch north to the border. Whew. Started hiking 12:30 July 15.

First of all, it was so cool to reunite with Puff Puff.  Remember she hiked the NOBO last year too!  I have made a modest miles plan to help Dan  and Jackie ease into the long distance hiking thing which she graciously accommodated until Stehekin. The first day we went just 11 miles, the second 13, in a cloud most of the time which meant there was very little view payoff for the work.  We all dove into our tents in the middle of the day to escape the wet and the bugs, oh boy what fun.  Day 3 we slack packed to Monument 78 and back, a lovely day that felt as if we were finally “starting” the SOBO.  The Grateful Red camped with us but we’ll never see him again, he’s hiking big miles right out of the box. You will know him when you see him, long dark red hair with a nipple length red beard.

We endured torrential rain on Day 4, the trail filled up and was running a river, but things improved as we passed through Hart’s Pass and camped 6 miles beyond on a clear warm night.  Everybody’s mood was lifted as we continued through the alpine glory of the North Cascades.  We walked down to the Methow River bridge through blow down so bad the trail was nowhere to be found.  Gigantic trees were tossed and piled every which way, sometimes I had to crawl over a stack of 4 or 5 at a time, sometimes I crawled on my belly underneath, pushing my pack ahead of me.  Exhausting, slow, and annoying.  We met Scott here and he joined us for the next couple camp spots.  Cutthroat Pass was the reward for struggling uphill through even more blow down.  We camped under the Buck Moon, a night so bright and beautiful in a little saddle that no head lamps were necessary for the midnight creep to a pee spot. The temperature nearly reached freezing overnight while the next day’s hike down into North Cascades NP was like descending into a sauna.  Scott, Puff Puff and I camped after about 21 miles just as a thunder storm broke and cooled the air off enough to sleep.  Meanwhile Dan and Jackie camped with a troop of teenage boys after hiking their personal record of 18 miles!  Amazingly, and I assume because it’s a National Park and not USFS, the blow down had been cut off the trail for the 17 miles to High Bridge. Thank you NPS!

Our 2 little groups met at the bus stop for the ride into Stehekin.  First stop The Bakery.  Real food for the first time in the very long, slow 8 days it took to get here.  We had a reservation at the Stehekin Valley Ranch for the 4 of us for a zero: Puff Puff, Dan, Jackie and me.  Laundry, prime rib, beds, kitties and people who smelled clean.  Plus everybody who lives and works in this area makes you feel welcome!

Here’s  a weird note about this blog.  I keep a journal when I hike or travel solo, which is mostly.  But when I have companions, I tend to babble every little thought out loud, rather than quietly muse on paper.  Once it’s out of my mouth, it appears to be out of my brain too.  So these blog entries might be a little circumspect for awhile.  Which might be a good thing.  I’m enjoying the company of the Nearly Dead  although it’s weird worrying about other people’s blisters and mileage and being responsible for picking the day’s destination.  Definitely pushing  the limits of my comfort zone.  It’s easier if I imagine they’re just little skier punks I need to direct.

4 thoughts on “Hart’s Pass to Canada to Stehekin”